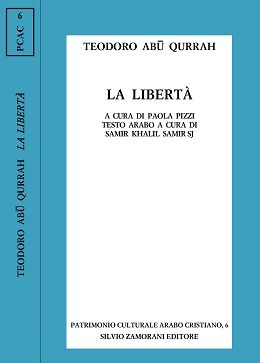 This treatise is one of Theodore Abū Qurrah’s (750-825) works written in Arabic. This Melkite bishop initiated a new theological and philosophical age in Middle Eastern Christianity. From the end of the eighth through the beginning of the ninth century A.D., the Church was engaged in a detailed process of comparing Christianity with Islam. In fact, the theological influence of Christianity upon Islam is still being discussed by scholars today. This fluid environment is reflected in Theodore Abū Qurrah’s treatise by his choice of subjects, literary style, and language. Human freedom, personal responsibility, eternal punishments and rewards, the origin of good and evil, and so on, were the subject of discussion between philosophers of both traditions. In this on-going debate Theodore Abū Qurrah, an expert in «‘ilm al-kalām» (scholastic theology), offered his apology for human freedom against schools of Islamic thought committed to the doctrine of Predestination.