There is nothing wrong with the title of this new series of studies titled The Treasures of Arabic Christian Culture. Although many people may be surprised in seeing the words Arab and Christian in the same sentence, Arabs were present at the first Pentecost and received the baptism of the Holy Spirit (Acts 2:11). Later some Arab tribes accepted Christianity, invented the Arabic script, and formed the first kingdoms in the Arabian Peninsula long before the rise of Islam.

After the rise of Islam, other Middle Eastern Christian communities, Syriac, Melkite, and Coptic, also came to be «Arabized» to a significant degree. A Christianity inspired by the Fathers of the Church but thinking in Arabic grew up in this environment. It re-examined the Christian heritage as it came into contact with a new religion, Islam, and for the first time Christians weighed their beliefs against those of another faith.

These Christians preserved and synthesized the scientific and philosophic inheritance of the Hellenic world and because of this the Muslim Caliphs of Baghdad and Damascus sought them out as court physicians and councilors.

They transmitted this treasure, through translations and commentaries on the medical treatises of Galen and Hippocrates, the philosophy of Plato, Aristotle, and their disciples, and the scientific works of Euclid and Ptolemy. They were students of Greek learning and they began in the 9th century a renaissance in the Arab world that three centuries later spread to the West.

Beginning in the 16th century, these Arab Christians came to study in the West and when they returned home they built modern colleges in Lebanon, founded printing houses, and disseminated the methodology of the scientific revolution. As they brought learning from the west to the east so also they became in the 17th and 18th centuries the first Orientalists, introducing Westerners to Middle Eastern culture, both Christian and Muslim. In the 19th century, they were the first promoters of the nahda, a second Arab renaissance, starting newspapers and other publications, reviving theatre, novels, and later the cinema.

Even so, these Arab Christians, being no less Arab than their Muslim counterparts, were not taken seriously in the Western world. In the endless fascination with all that was «different», they were dismissed as «charming» and «exotic». Because their faith was so similar to that of the West, because they were so oppressed by their Ottoman overlords, and because they were so few in numbers, they were ignored by Western intellectuals, attracting the attention only of those missionaries that sought to «evangelize» them.

In order to remedy this serious gap of knowledge about the Arab Christian world, the present series, The Treasures of Arabic Christian Culture is being offered to scholars and interested readers in Italy and all of Europe.

How can we say that God is one? When we say it, are we saying it because – as Muslims believe – we wish to affirm God’s absolute oneness and uniqueness, or because – as Christians understand it – we recognize and accept a modulation within it?

With his Treatise on Divine Unity, the Christian philosopher Yaḥyā ibn ʿAdī (d. 974) sets out to demonstrate that the true meaning of the One does not contradict that of the multiple: on the contrary, it actually implies it. The Christian concept of divine Oneness, which is also simultaneously a “Trinity”, takes its solid philosophical basis from this reasoning.

The method of the Treatise is in reality philosophical, even if its purpose is purely theological: the consideration of the notion of the one (al-wāḥid) aims, in fact, to define the quiddity (māhiyyah) of God. In the wake of Plato’s Parmenides, and with particular attention to the Aristotelian discussion of the one, the different meanings of the one and unity, as Yaḥyā presents them, are conceived in polemical dialogue with the Islamic theological context: the opposition between the Christian and the Islamic conceptions of divine Oneness is implicit but constant throughout the whole Treatise. 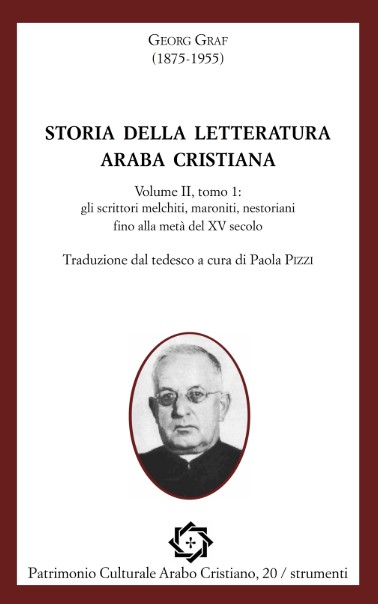 (It is the italian translation of the first part of GCAL 2nd volume until page 219. No bibliographical update was made. Instrument of work for students who can read italian) 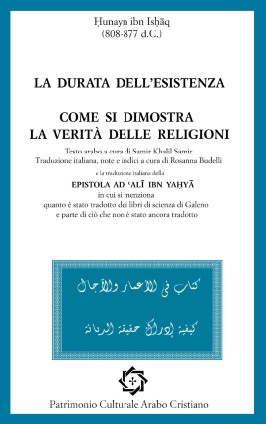 Ḥunayn Ibn Isḥāq is known as the most important translator of works from Greek into Arabic at the dawn of Islam. As Christian Intellectual and scientist, Ḥunayn contributed enormously to the development of Arab-Islamic civilization, thanks to his work of transmitting knowledge from the Greek world to the Arab world. At the crossroads of more cultures and more languages, Arab and Syriac Christians played a fundamental role in the circulation of science and philosophy in the territories dominated by the Abbasid Caliphate. As a doctor, Ḥunayn worked for a long time in Baghdad, at the court of the caliphs of the time. In this book we publish The Epistle of Ḥunayn Ibn Isḥāq to 'Alī Ibn al-Munajjim, with the complete list of the galenical works he translated, and two of his small treatises of apologetic and religious content (How to demonstrate the truth of religions and The duration of existence) that allow us to know his thoughts on sensitive topics that are still relevant today.